The Secret to a Happy Year 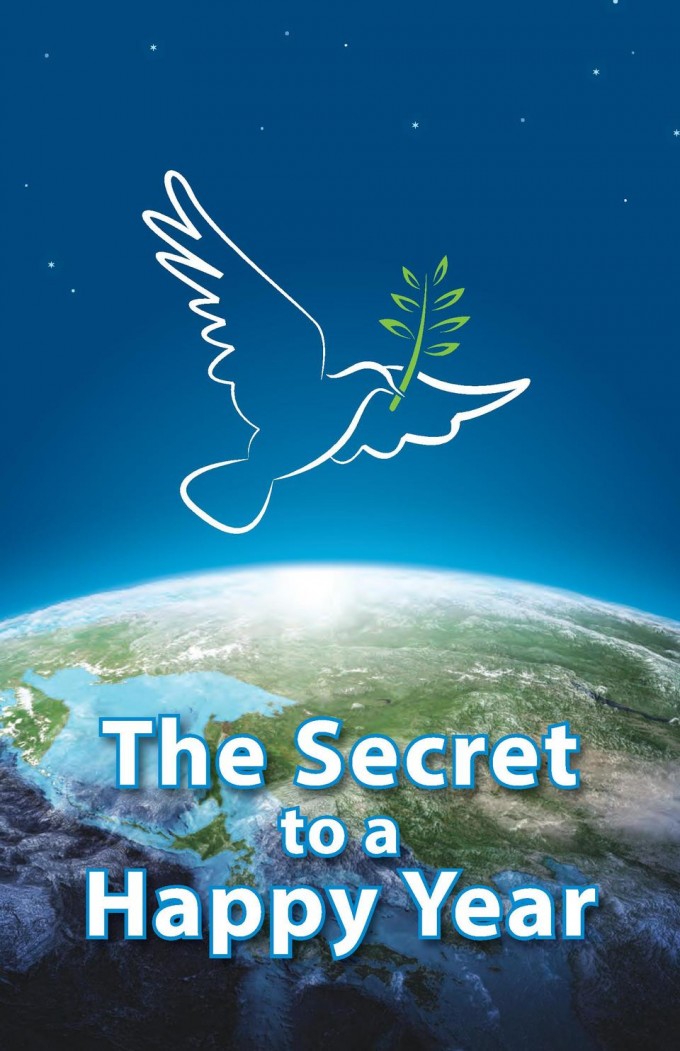 Each New as a year time Year.” around of The reflection. High this time, Holy This Jews Days year, wish are it seems one a time another, as of though joy, “Happy as there well is much more to reflect on than in past years.
The past year has been a trying one for all Jews, wherever they live, due to the resurgence of anti-Semitism. So in the spirit of the High Holy Days, let us examine our situation and find the opportunity in the challenge.

The war in Gaza took its toll not just on the Israelis and Palestinians. In many ways, it has uncovered and deepened a chasm that exists within Jewish communities the world over. Differences that were once settled peacefully and calmly through debate have now become so poignant and tense that community leaders offen opt to avoid any discussion fearing that it will deepen the schism within their already divided community.

But this murky point in our collective existence is actually an opportunity, and the High Holy Days are the best time to begin to set matters straight. Now is a time when people are inclined to introspect is it suitable to reflect on our actions in light of the negative trend toward us in the world.

The most important part in the Yom Kippur (Day of Atonement) service comes affer reading the Torah portion. It is called, Haphtarah, and in it, we read selections from the Bible (Tanach). On Yom Kippur, the text of the Haphtarah is the book of Jonah. In fact, in many communities, the wealthy compete over the right to read this Haphtarah, as it is known to be a Segula (endowing power) for gaining riches.

Jonah’s story is special because it speaks of a prophet who first tried to “dodge” his mission, but then repented. Another special point about Jonah is that his mission was not to set the people of Israel straight, or warn them of what would happen if they did not mend their ways. His task was to save the great city of Nineveh, whose residents were not Jewish. Today, in light of the rising anti-Semitism, it is more pertinent than ever to reflect on Jonah’s story and the message behind it.

G-d orders Prophet Jonah to warn the residents of the great city of Nineveh that they have corrupted their ways. Put differently, Jonah must warn them that they have become so alienated and egotistical that their society is unsustainable. The prophet’s task was to lead the residents of Nineveh back from their hatred, and into unity and love of others, or they would all be destroyed.

However, Jonah decides to evade his task and takes to the sea in an effort to escape.
Just like Jonah, we, Jews, have been evading our mission for the past 2,000 years. And yet, we cannot afford to keep evading it. We have a task. It has been given to us when Abraham united us into a nation based on love of others and mutual guarantee. This is when we learned that our existence depends on our unity, and on being a model of unity for the entire world. (For more on that, see my article, “Who Are You, People of Israel,” published September 20, 2014 in The New York Times.)
For centuries, our sages and leaders have repeatedly stressed the indispensability of our unity for our prosperity, and even for the prosperity of the world. They also stressed that when we fall into unfounded hatred, calamities and troubles soon pursue us and the world suffers, too.

But over time, we have lost awareness; we have grown detached and alienated from each other. Worse yet, we have come to ridicule such terms as “light for the nations” and “a chosen people.” We have no recollection of what we were chosen for. Our task has been forgotten. But it still awaits, and when we run, there comes a storm.

Returning to the story, Jonah’s escape from his mission by ship caused the sea to roar, and nearly inflicted disaster on everyone on board. At the height of the storm, Jonah went to sleep, and detached himself from the turmoil around him, while the sailors remained on deck and struggled to save the vessel. Gradually, they began to suspect that it was someone among them who was causing the storm to rage. They cast a lot and discovered that that man was Jonah, the only Jew on board.

Today’s plight bears many similarities to Jonah’s ship. The world has become a global village, we’re all in one boat, and the sailors—namely the residents of the world—are blaming the only Jew “on board” (the Jewish people) for all their troubles.

And like Jonah, we are sound asleep. We are beginning to wake up to the existence of hatred, but we have not woken up to our fate, to our vocation. If we do not wake up very soon, the sailors will throw us overboard, just as they did with Jonah.

In the story, the sailors make a desperate attempt to calm the sea, and by Jonah’s order they throw him overboard. Once in the water, the storm calms, but a whale swallows Jonah. For three days and three nights Jonah introspects in the fish’s abdomen. He begs for his life and resolves to carry out his mission.

Just like Jonah, each of us carries within something that is stirring up the world. We, the people of Israel, are carriers of a method of connection, a method for achieving peace throughout the world. This is the root from which our nation grew—the root of unity. This genome ties us into a single nation, and today we must rekindle it because wherever we go, this untapped power destabilizes the world around us to compel us to unite.

The unity between us will inspire, and even compel, the rest of the nations to do the same, just as now the separation among us projects separation to the whole of humanity. This is the reason for all our troubles. When we unite, it will endow humanity with the energy required to achieve worldwide unity, where all people live “as one man with one heart.” So the only question that remains is whether we assume our responsibility, or prefer to be thrown overboard, only to subsequently agree to carry out our task.

A Light for the Nations

As we described above, Jonah’s role was to turn unfounded hatred into brotherly love. This is also our role. Nothing has changed except the date and the names. And instead of being “a light for the nations,” we are trying our best to be like the rest of the nations.

However, the world needs healing. As more and more people and nations subconsciously sense that the Jews are not like the rest of the nations, that they are responsible for their misfortunes, they are beginning to treat us according to their feelings. People are reacting instinctively to what is happening to them, and naturally turn their anger and frustration against us. The Day of Atonement is our chance to truly reflect on our vocation. It is an opportunity to make a decision to unite, and be “a light for the nations.” Only then will the global whirlpool around us subside, humanity will be at peace, and a canopy (Sukkah) of peace will spread over all of us.

In that Sukkah, we will all sit as one, without struggle or strife, and we will make unity our prime value. Now, as we recognize our role, we must begin to raise the tenet, “love your neighbor as yourself,” above all values until it becomes a thatch that protects us from any trouble and affliction.

Indeed, if we want to end our troubles and be rid of anti- Semitism, if we desire to turn judgment into mercy, and have a safe and happy life, we must unite, and thus set an example of unity to all the nations. This is how we will bring peace and quiet to the world. Now we can see why people pay so much just to be awarded the privilege of reading the Yom Kippur Haphtarah, the book of Jonah.

Our Sages’ Words about Our Unity, Love, and Our Role toward the World

Our nation’s success depends only on brotherly love, on connecting as one family.

“Love your neighbor as yourself” is the great rule of Torah, to include in unity and peace, which is the essence of vitality, persistence, and correction of the whole of creation—by people of differing opinions merging together with love, unity, and peace.

Any turmoil in the world comes only for Israel. Now we are called upon to carry out a great task willingly and mindfully: to build ourselves and the entire ruined world along with us.

“Love your neighbor as yourself.” Everything that you would like others to do for you, do them for your brothers.

When is the Creator fond of creation? When all of Israel are bundled together without envy, hatred, or competition among them, and each thinks of one’s friend’s well-being and favor. At that time the Creator is delighted with His creation.

The book, Remember for Miriam, Chapter 11

When all human beings agree to abolish and eradicate their will to receive for themselves, and have no other desire but to bestow upon their friends, all worries and jeopardy in the world would cease to exist. And we would all be assured of a whole and wholesome life.

The Role of Israel

The people of Israel must be the first nation to assume the international altruism, and be a role model of the good and beauty contained in this form of governance.

The people of Israel, who are more capable of approaching the Creator than all the other nations, will then bestow the bounty upon the rest of the nations.

Rav Baruch Ashlag (the Rabash), The Writings of Rabash, Vol. 2, Letter no. 18

The Israeli nation had been constructed as a sort of gateway by which the sparks of light would shine upon the whole of the human race the world over.

The dissemination of the wisdom in the masses is called “a Shofar (a horn used on festivities).” Like the Shofar, whose voice travels a great distance, the echo of the wisdom will spread the world over, so even the nations will hear and acknowledge that there is Godly wisdom in Israel.

It is upon the Israeli nation to qualify itself and all the people of the world through Torah and Mitzvot (commandments), to develop until they take upon themselves that sublime work of the love of others, which is the ladder to the purpose of Creation, being adhesion with the Creator.

• Are we Jews different from other nations?
• Why was I born Jewish?
• Why is there anti-Semitism?
• Could the Holocaust happen again?
• Why are there Jews?

About the Author Michael Laitman is a Professor of
Ontology, a PhD in Philosophy and Kabbalah, and an MSc in Medical
Bio-Cybernetics. He is the founder and president of the ARI Institute.
He was the prime disciple and personal assistant to Kabbalist, Rav
Baruch Ashlag (the Rabash).

To date, Laitman has published more than 40 books, translated into 35 languages. Notable recent publications are Like a Bundle of Reeds: why unity and mutual guarantee are today’s call of the hour,  A Guide to the New World: why mutual guarantee is the key to our recovery from the global crisis, The Psychology of the
Integral Society, and Self-Interest vs. Altruism in the Global Era:
how society can turn self-interests into mutual benefit.